The Impact of Digital Signage on Advertising 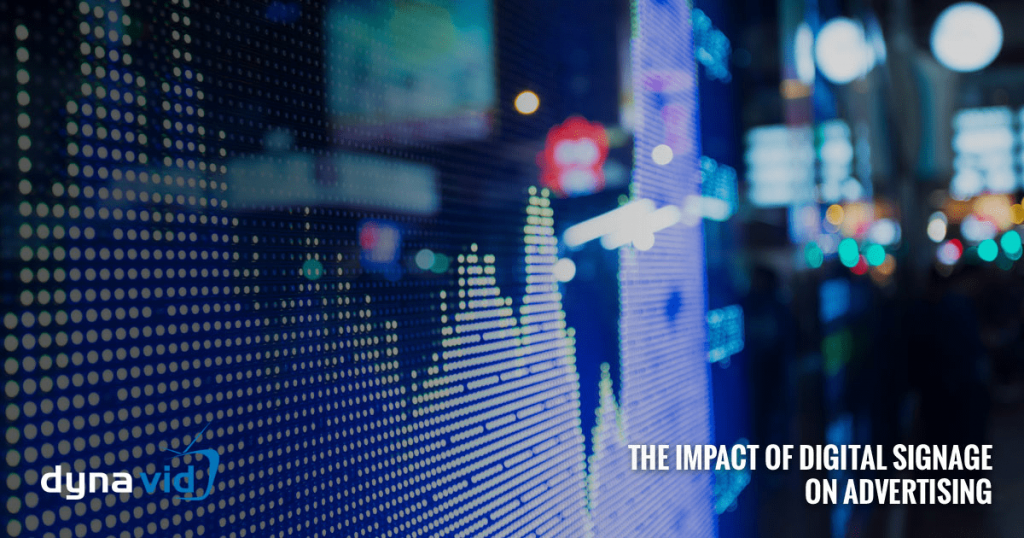 Despite the popular belief, advertising is not the product of the modern society nor the twenty-first century. It is believed that it originates back to ancient Egypt when people used papyrus to make sales messages or posters, and ancient China, where advertising was only oral. Europe saw its first advertisers in the Middle Ages when the illiterate population recognized blacksmiths, millers or cobblers on an image in front of their trade shops.

Fast forward to the modern era: ads started booming in the nineteenth century, but did not explode until the twentieth-century with the help of radio, TV, internet.

With the advanced development of science, IT, and technology in general, advertisers have reached a new frontier for spreading endorsements and winning the attention of potential consumers: digital signage.

What is digital signage?

When static images and paper ads were not enough, pictures started moving and we got TV commercials and what is now known under the term ‘digital signage.’ This technology mainly uses digital images, video, and other information to transmit information in a digital form.

Digital signage can be indoors and outdoors. Marketers expect that this market will grow and reach $23.76 billion by 2020 (Source: Markets and Markets).

How can digital signage improve advertising?

There are numerous benefits of utilizing digital signage, and not all of them are directed toward more sales.

Communication is at the core of advertising. Someone has a message which they want to spread, and ads enable that process. The more important the message, the wider the influence. What digital tech brought us is bigger impact via a new medium.

You no longer have to kill time in a waiting room – there is digital signage to entertain you and spread the important messages from a brand. This technology allows for a better connection between a company and the end-user which the ad targets. And what is best about it, is that the sign is not alone – it can be followed by other images, presentations or videos.

Digital signage may be the most interactive of all advertising forms. What makes it so good is that its positive results can be seen instantly. You will see how your audience reacts when in touch with your message. People are visual beings, and they need something to be entertained by, something to respond to, and something to interact with. Touch screens and mobile devices are the next big thing in digital signage, and they will captivate your viewer’s attention and sell products without spending much time or money.

Some may think that investing into digital signage is a bit pricey. However, if you think of the amount of money you can spend on classic advertising campaigns – which come and go as they are printed and thrown away – giving a chance to a one-time investment does not sound like such a bad idea, does it? What you initially pay allows for countless new campaigns, promotions, and commercials.

Some predict the death of classic, 2d advertising, so it would be best to jump on the fast train right at the station and start visualizing data on digital screens ASAP.

Digital signage at the dealership

If you are asking yourself how digital signage can help your dealership, we have the answer: in many ways! Honda of Tenafly, NJ hit the ground running with Dynavid’s digital signage option. They have TVs all throughout the dealership broadcasting new car specials, savings on services, parts pricing, information on upcoming events, and much more.

Timing is everything, so if you draw the customer’s attention at the right time, you might end your day with an extra sale.

Request a demo for our dynavidDS now.